Just like the window seat bookcase, I am trying some new things with this new woodworking plan (see some of the new things here). I have long had a goal of creating near magazine quality plans. As I get new copies of Fine Woodworking, I pay close attention to the illustrations they use. In my plans, I use SketchUp to illustrate the construction process, but SketchUp has some limitations; specifically x-ray views to show hidden joinery, or better said; joinery which is out of view. The illustrators at FWW typically draw in blue lines to show such joinery. See below (click to enlarge)…

Note how blue is used to show some of the non-visable joinery.

Even though I have tried several different ways to pull this off, I have not been able to create the same look using a combination of SketchUp and Photoshop. I am confident it can be done; just need the right teacher. 🙂

During the past week, I have added some new pages to The Versatile Media Cabinet plan. I am also refining some of the previous pages. Some of changes which are typical of the editing which I  go through are shown below…

Note how the image tilts pointing to the lower left of the page. While thumbing through the plan, this page and page 10 both had images which point in the same direction. I did not like this look, so page 11 got a change.

The current view of page 11 had the image straight and centered on the page. I am about 85% happy with how this looks. I may change it further; maybe a box around the text below the image. 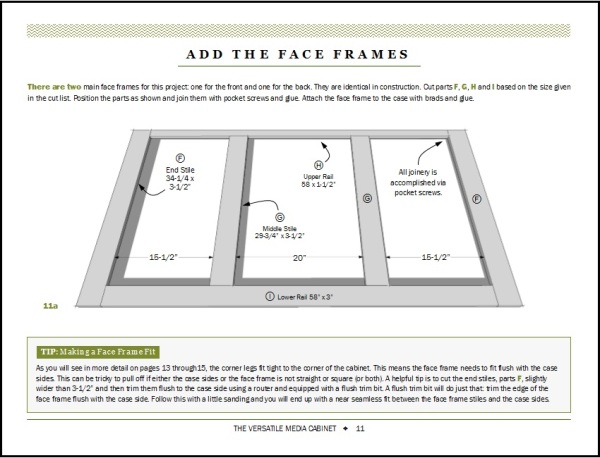 One thing that Tim Killen wrote about recently at Fine Woodworking.com has to do with grain direction which makes viewing a SketchUp document harder to understand (see “Showing Grain Direction Without Spoiling the Drawing” by clicking here). I learned early on that adding a lot of grain or even too many objects can be confusing.

On page 16, I had originally wanted to show, in full color, some of the needed parts for drawer guides sitting on a workbench… 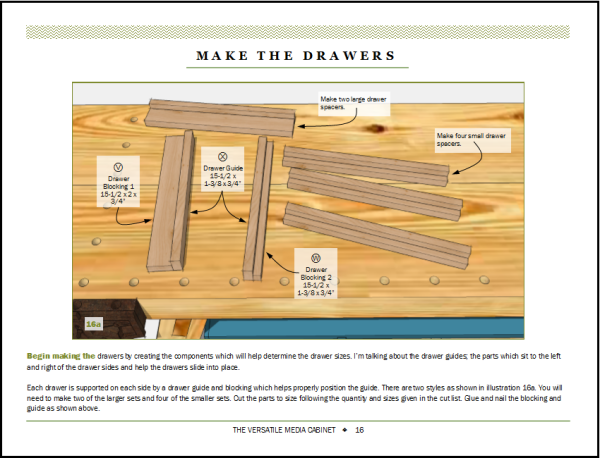 I felt all this color was distracting or as Tim Killen says “spoils the drawing.” And it does. So, I reworked the image to be easier to view.

And so the work on this plan continues. I am about 2/3 finished; I’m working on the section where the drawers are being built. Here is what The Versatile Media Cabinet looks like now (click to see full screen)…

Still a lot to do before this plan is finished. I hope to have it available for download in a couple of weeks.